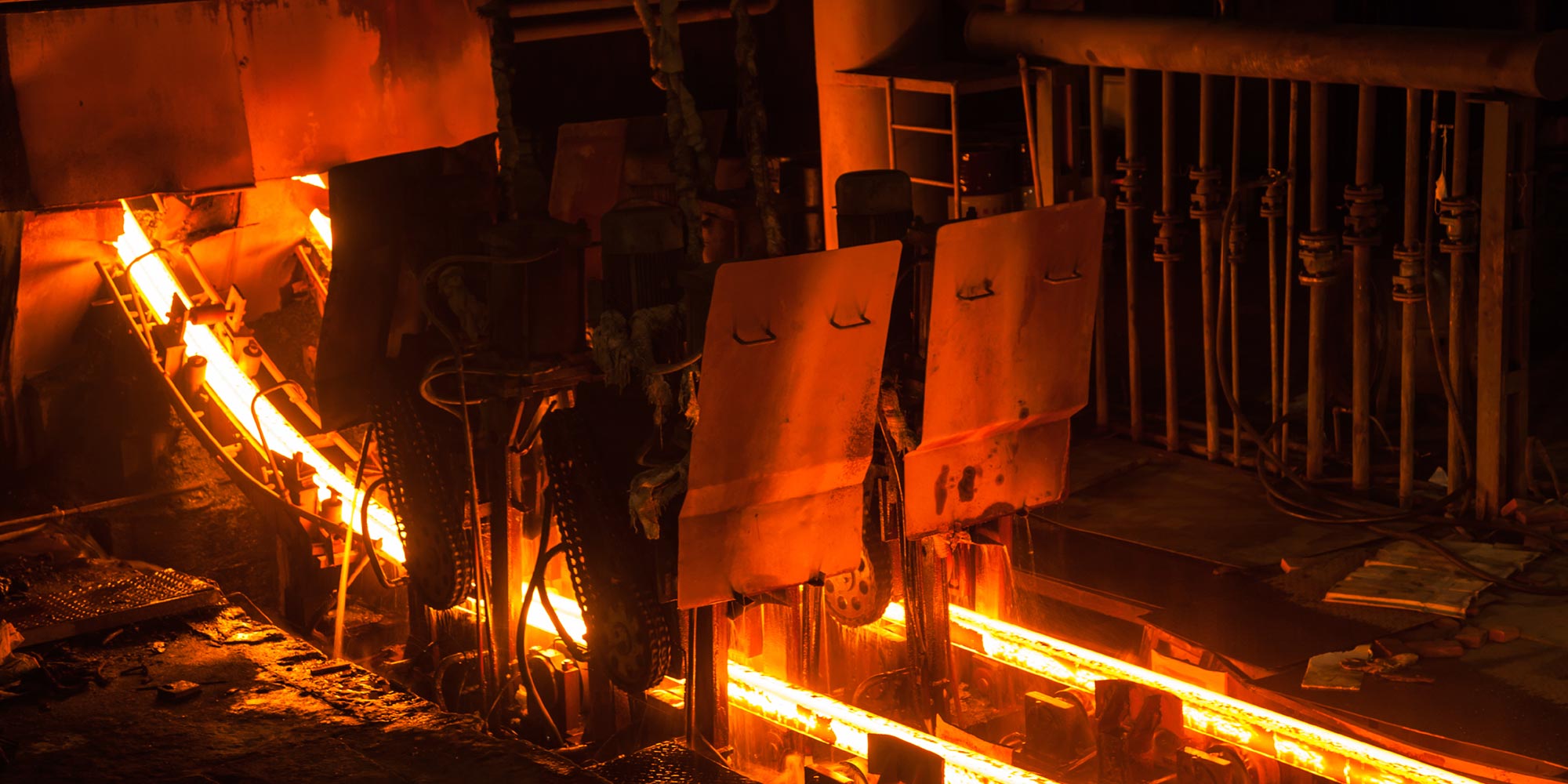 China’s Iron and Steel Industry Faces Harsh Winter: A Look at the Current Situation and Future

SPEEDA Research Institute provides insights and independent analysis given by our in-house analysts. This report will focus on the Chinese iron and steel industry and its perspective.

According to the World Steel Association, the global output of crude steel was 1.662 billion tonnes in 2014, up 1.2% YoY. By region, China ranked top amongst all nations, growing 0.9% YoY to 820 million tonnes that year. It was followed by Japan at 110 million tonnes, and the USA, India, and South Korea in descending order.

Looking at the regional crude steel apparent consumption (production + import – export) per capita, China stood at 510 kg per person in 2014, recording a CAGR of approximately 7% over the period of 2007–2014. This figure surpassed that of the USA and Germany, which are major industrial countries. South Korea was the champion, with the apparent consumption per capita standing at 1,118 kg. This is mainly attributable to the fact that South Korea has the highest per capita automobile production volume in the world, which is reported to be 0.09 units as per various disclosed materials, outperforming China (0.02 units) and the USA (0.03 units) significantly. 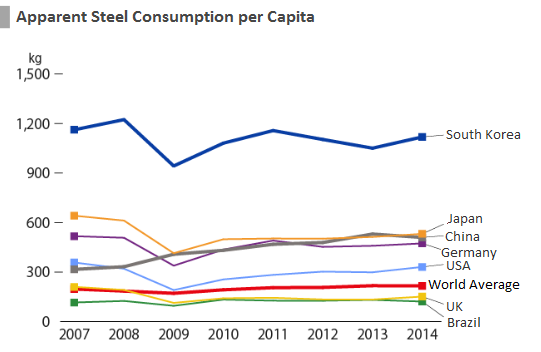 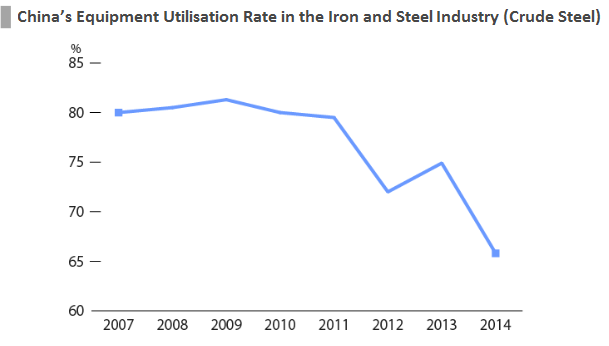 The steel price has also declined substantially in China from 2012 onwards. According to the China Iron and Steel Association, the composite price index of iron and steel materials was 2,558 points in August 2015 (January 1994 = 100), which is the lowest figure since 2006 and a 62% decrease compared to the highest point in July 2008 (6,805.61 points).Likewise, the prices of all kinds of iron and steel products have been on a downtrend. The annual average settlement price of steel materials declined 31% from CNY 4,468 per tonne in 2011 to CNY 3,047 per tonne in 2014. This also contributed to the sluggish growth of the Chinese iron and steel industry. 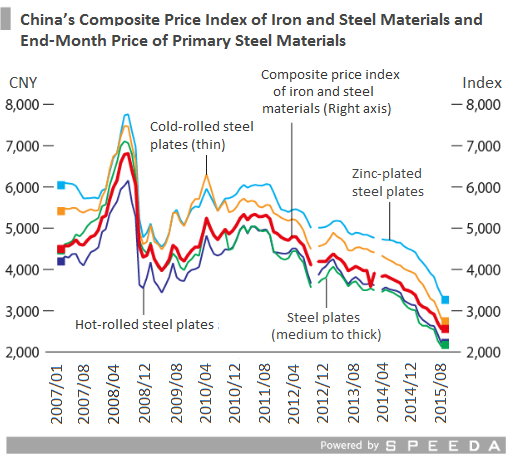 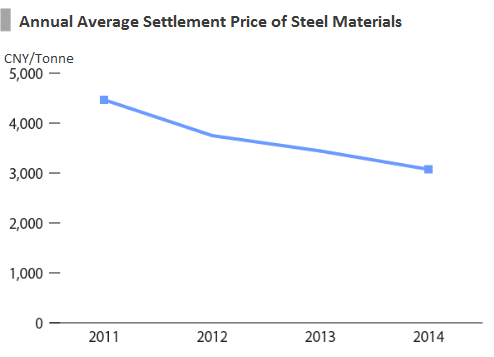 Although China is the global leader in terms of crude steel output, its industry technology remains at a medium to low level. Currently, high value-added products account for less than half of the majority of Chinese iron and steel manufacturers’ output. The quality of high-end products such as high-intensity steel strips (mid-to-thick), extra-thick steel plates, and zinc-plated steel plates for automotive use produced in China is far behind those produced in Japan and Germany.Overseas, the share of special steel accounts for 10% of the total industry, while that in China hovers at 5%. Moreover, mid-to-low-level special steel products such as Q345C steel plates and alloy steel are predominant, taking up a roughly 80% share of the total industry product breakdown. 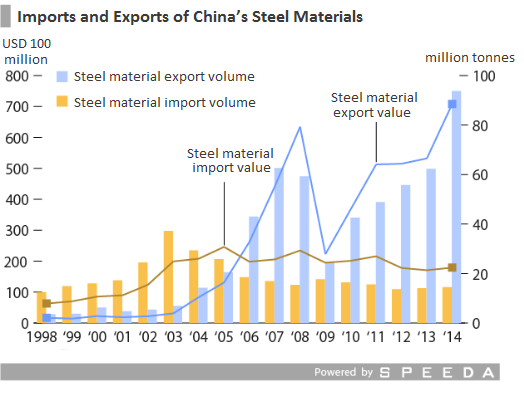 The construction industry, among other downstream sectors, has the largest demand for steel materials, reporting a total amount of 420 million tonnes in 2014. The machinery manufacturing industry follows, with demand amounting to 150 million tonnes in 2014. The automobile industry ranks third, consuming 51.64 million tonnes of steel materials in the same year. Each of these industries accounted for 56.5%, 19.7%, and 7.0%, respectively, in the total demand breakdown. Compared to the global average in 2014, construction and machinery manufacturing contributed higher shares in terms of steel demand, while automobile had a lower share. 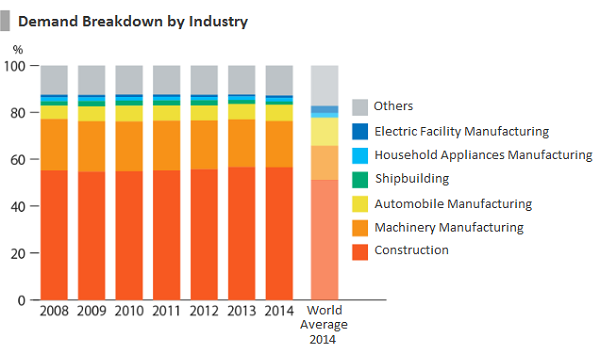 Source: by UZABASE based on disclosed materials by World Steel Association and other institutions

According to data released by China Iron and Steel Association, the number of companies involved in the industry amounted to 11,031 in 2012; of them, 10,608 were SMEs, accounting for 96% of the total. The CR4 ratio (four-firm concentration ration) was 22% in 2012, lower than that of Japan (74%) and the USA (53%) that year.In addition, the CR10 ratio in 2014 was 36%, while the CR3 ratios of South Korea and Brazil were 90% and 89% respectively. Other major iron and steel manufacturing countries such as Japan, Russia, India, and the USA had CR3 ratios of 83%, 83%, 67%, and 60%, respectively.So far, growth of overall capacity in the Chinese iron and steel industry has stemmed from an increase in the number of manufacturers, since the industry structure— where SMEs form the majority— has hindered it from taking advantage of a scale economy. Additionally, the slowdown of the Chinese economy will push the industry into a harder situation. 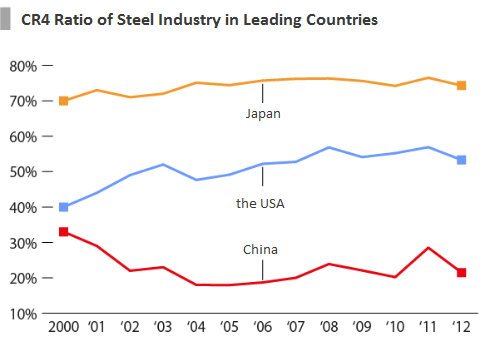 According to the World Steel Association, ArcelorMittal (LUX) was the leading manufacturer in terms of crude steel output in 2014, reaching 98.08 million tonnes. The company’s output was larger than the combined total of runners-up Nippon Steel & Sumitomo Metal (JPN; 49.03 million tonnes) and Hebei Iron & Steel (CHN; 47.09 million tonnes).Looking at the breakdown of the top ten manufacturers, Chinese firms took up six places, but only three of them had a positive net profit margin. On the other hand, three non-Chinese companies made profit, and Nippon Steel & Sumitomo Metal recorded a net profit margin of 3.8%. 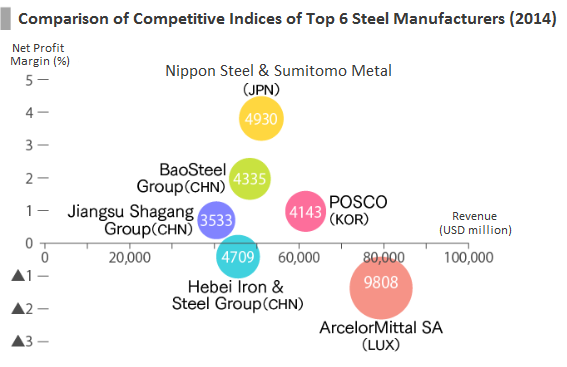 Source: by UZABASE based on disclosed materials by World Steel Association and other institutions
Note: Figures in the bubble refer to the crude steel output (10,000 tonnes).

Looking at the ranking of crude steel output over the same period, the average output of the top 50 firms was 19.68 million tonnes in 2014, lower than the average of those ranked below 16th.For example, CITIC Special Steel Group (CHN), ranking 50th, recorded an output of 7.93 million tonnes, lower than the average of 11.75 million tonnes. In addition, of those ranked between 51st and 100th, 35 companies had a capacity lower than 5 million tonnes per annum, 22 of which were Chinese.The combined total output of these 22 companies was 76.48 million tonnes, not even exceeding the aggregate of the third-ranked Hebei Iron & Steel Group and the fourth-ranked BaoSteel Group. This again demonstrates the low market concentration in the Chinese iron and steel industry.Moreover, the total revenue of iron and steel manufacturers above the designated size has kept declining, recording a 15% YoY decrease to CNY 805.6 billion as of end-2014. The accumulative revenue by September 2015 was on a continuous downtrend, dropping by 22% YoY to CNY 493.0 billion. In terms of profit, loss has been reported since August 2015, and the accumulative loss in September reached CNY 3.8 billion. 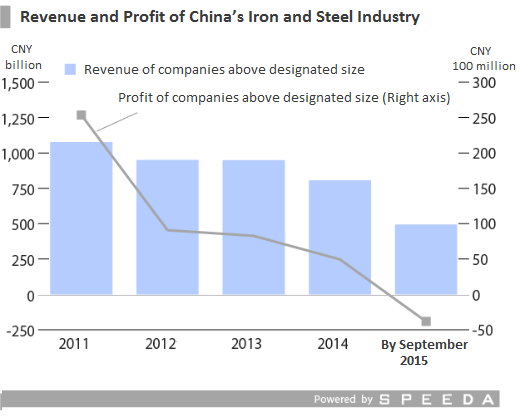 China’s Iron and Steel Industry: What’s to Come and Where to Go

-    Mergers and Acquisitions and Industry Reorganisation

As mentioned above, the Chinese iron and steel industry has low market concentration, which hampers the industry from taking advantage of a scale economy. In addition, the slowdown of the Chinese economy will also affect the demand for iron and steel. Therefore, industry players will likely face a harsher environment in the future. As per data from China Iron and Steel Association, in 1H 2015 the aggregate profit of the top ten profit-making companies was CNY 16.5 billion, up by 113% YoY. In contrast, the aggregate loss of the top ten loss-making companies was CNY 13.9 billion, up by 152% YoY. This indicates a polarised course of development in terms of profitability in this industry.Against such a background, it can be said that the industry is right at the threshold of mergers and acquisitions and industry reorganisation. Seven big M&A deals took place in this industry in 2014. While private players have been actively carrying out M&As, state-run companies are lingering about. Additionally, the M&A activities are region-specific. Entering 2015, the Chinese government made plans regarding industry reorganisation to support the industry development. In March, the MIIT issued the Solicitation of Public Opinion on Policies Concerning Steel Industry Adjustment (Revised in 2015) and demanded the industry to accelerate in mergers, acquisitions and reorganisation.The policy also set goals on the CR10 ratio, aiming to boost the figure to 60% by 2025 and encouraging the formation of steel conglomerates that comprise three to five firms with global competitiveness and influence. The MIIT is also stipulating the Industry Transforming Plan (2015–2017) for the iron and steel industry, which will be the guideline for the industry’s future development. Going forward, it can be expected that state-owned companies will undergo progressive M&As as well.

In 2014, Beijing has been promoting the strategy of “One Belt One Road”, which aims at expanding the scope of infrastructure companies by pushing them to overseas markets. It can be anticipated that iron and steel manufacturers will also leverage this opportunity to counteract domestic overcapacity to a certain extent.As per data from the Customs of the PRC, by 1Q 2015, India and Pakistan of South Asia have increased their steel material imports by 207% and 124% YoY respectively; Turkey, the UAE, Saudi Arabia, and Iran have also reported a growth rate of 200%, 137%, 110%, and 97%, respectively. Vietnam, Indonesia, the Philippines, Thailand, Malaysia, and Myanmar of Southeast Asia have each recorded a YoY growth in imports of 134%, 114%, 47%, 79%, 78%, and 77%.Furthermore, with demand overseas increasing, Chinese steel manufacturers are setting up branches abroad as well. On 27 March 2015, Metallurgical Corporation of China (MCC Group, CHN) and Magang Group (CHN) joined a memorandum with Ferrum (CHE) regarding establishing a joint venture for steel production with an annual capacity of one million tonnes in Kazakhstan. Jiuquan Iron & Steel Group (CHN) has also expressed its intention of building a production plant in Kazakhstan.

The Chinese iron and steel industry, despite ranking top in crude steel output, is facing serious issues. While exports keep growing, the industry’s low technological level will gradually diminish its competitiveness. Furthermore, low market concentration hinders the industry from making use of scale economies for higher profits. Finally, with the slowdown in the country’s economy, the industry faces grim prospects ahead.   Among the top ten crude steel manufacturers in 2014, six of them were Chinese companies, with half of these reporting losses. In the future, reorganisations and M&As, together with entry into overseas markets, should be put into action in an effort to lead the industry back to a favourable trend.