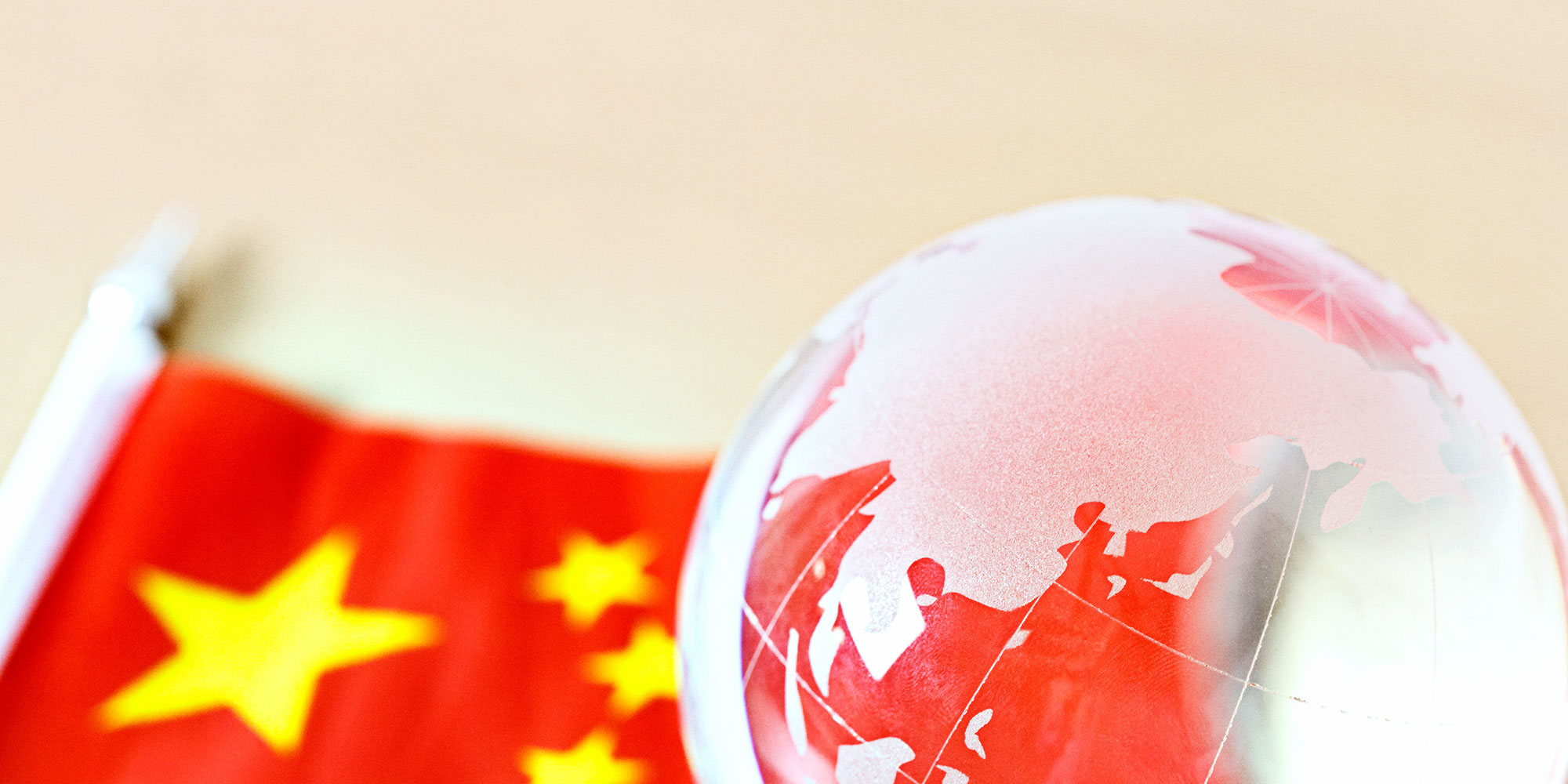 The People’s Republic of China (PRC)(*1), a middle-income country according to the World Bank, has seen rapid growth since implementing Economic Reforms programme in 1978. It is now the second-largest economy in the world, accounting for 15.2% of global GDP in 2015, preceded only by the USA (24.5%). China is undergoing multiple transitions as it attempts to increase the contribution of the tertiary sector and shift towards a more consumption-driven economy from a capital investment-oriented one. Although China’s GDP growth has been slowing over the past few years, the IMF estimates it to be around 5.9% in 2020, still higher than the estimates for the USA (1.2%) and Japan (2.8%).

The PRC accounted for 13.8% of global trade in 2015. As a net exporter, it has traditionally traded low value-added products (benefitting from relatively low wage costs) for high value-added ones; this has compensated for a lack of advanced technological capability domestically. China currently attaches considerable importance to the development of high-technology industries and the advancement of R&D capability. As an extremely policy-driven country, the government plays an important role in guiding the expansion of these industries by formulating strategies. One example is its Made in China 2025 strategy, which assigns targets for related industries to achieve by 2025 in terms of production volume, technological requirement, sufficiency rate, etc. Regular five-year plans also draw a framework for the development of other industries.

Walking the Policy Tightrope; Expansionary Monetary and Fiscal Policy Necessary to Stimulate Growth while Maintaining Inflation amidst Depreciation of Renminbi

The People’s Bank of China implemented moderately expansionary monetary policy in 2016 to boost economic growth. The authority reduced the deposit reserve rate and the interest rate and also issued repos and other instruments in order to ensure sufficient liquidity in the money market. In response, the inflation rate rose a slight 0.6 percentage points YoY to 2.0% in 2016. The government also implemented expansionary fiscal policy, reducing tax revenues and increasing government expenditure. In particular, it comprehensively replaced business tax with value-added tax in order to eliminate tax duplication and to raise expenditure to improve people’s livelihoods, e.g. in healthcare and employment. This combination of monetary and fiscal policy has contributed to the depreciation of Chinese renminbi, adding cost-push inflationary pressures.

Although China has the world’s largest population, it is facing an increasingly significant ageing problem that will gradually take away the country’s demographic dividend and lead to an insufficient workforce. To manage this problem, the government replaced its one-child policy with a two-child policy, aiming to boost its low birth rate (around 1.2%) and to lower its high dependency rate (around 39%). China’s gender disparity currently stands at a female-male ratio at birth of 100.0:116.0 (India’s is 100.0:110.9). Although the figure is improving under stricter government regulation against sex identification of foetuses and gender-based terminations, concern remains, given a longstanding preference for male offspring, especially among older generations and rural residents.

As the world’s second-largest stock market in terms of market capitalisation (approximately USD 7.6 trillion as of 2016), China’s stock market is dominated by retail investors, while institutional investors are few; this results in a less rational investing environment. The market is greatly influenced by policy, but is largely independent from GDP growth prospects. The two major stock exchanges, the Shanghai Stock Exchange (SSE) and the Shenzhen Stock Exchange (SZSE), have both underperformed foreign peers despite GDP growth. The Chinese renminbi’s inclusion in the SDR basket marks China’s reform progress and international standing, and also fosters further liberalisation of the financial market, including liberalisation of the interest rate and the promotion of capital convertibility and liquidity.

Bond Market an Important Source of Government and Corporate Financing; Downgrade by Moody’s to A1 from Aa3 Remains Questionable

The bond market serves as a source of financing for infrastructure construction. The outstanding bond value grew at a CAGR of 13.8% to CNY 43.7 trillion (≈USD 6.6 trillion(*2)) during 2010-16. Further, types of bonds are proliferating, offering more options for local governments and corporates to finance their operations. Moody’s downgraded China’s credit rating to Aa3 from A1 in May 2017, as it anticipates erosion in China’s economy on the back of decelerating growth and mounting debt. However, the downgrade is questionable, as the country’s GDP growth rate is estimated to remain at a comparatively high level (5.9% in 2020, as per the IMF). Moreover, China has restricted local government financing, and local government debt and central government debt together came in at 36.7% of GDP in 2016, lower than the debt-to-GDP ratios of Japan (234%, 2015) and the USA (126%, 2015).

Creation of the People’s Republic of China in 1949 Ended an Extended Period of Foreign Rule; Economic Reform Initiated in 1978 Ushered in a Period of Rapid Development

Although the World Bank continues to classify it as a middle-income country, China became the second-largest economy in the world in 2010, after the USA and ahead of Japan. According to the latest UN data, China accounted for 15.2% of global GDP and 13.8% of global exports in 2015, carrying more weight in the global economy than before. Moreover, China has gained more influence in the world since being appointed one of the five permanent members of the UN Security Council in 1971.

China Ranked Second in Global GDP, Outperforming Japan and the Rest of BRIC 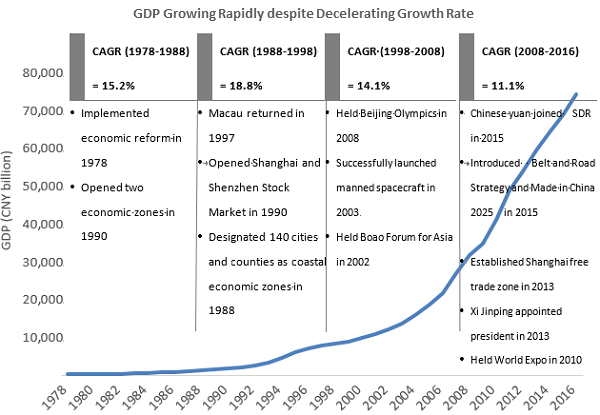 China’s civilisation dates back more than 4,000 years to the Xia dynasty (2070 B.C.), its first dynasty. Under imperial rule by numerous dynasties that followed, the country saw both prosperity and decline. China was never a unified kingdom until the Qin dynasty (221–207 B.C.). Later, under the Tang dynasty (618–907 B.C.), it experienced its golden age during which its economics and culture developed. During the late Qing dynasty (1644–1911), the government adopted a policy of isolationism, and the people became largely self-sufficient. The two Opium Wars (1839–42 and 1856–60) involving Britain and France as well as the Eight-Nation Alliance(*3) in 1900 reduced China to a semi-colonial and semi-feudal nation plagued by poverty, social instability, and war. The foreign powers gained commercial privileges and territorial concessions through their victories. Five trading ports in Shanghai, Ningbo, Xiamen, Fuzhou, and Guangzhou were forced to open, and China lost Hong Kong to Britain in the Opium Wars (Hong Kong was returned in 1997). The People’s Republic of China (PRC) was formally established by the Communists on 1 October 1949 after World War II (1939–45) and the Chinese Civil War (1929–49), marking the beginning of the revolution and the birth of socialism in China.

The economic reform introduced in 1978 initiated a new stage of development. The country’s GDP grew fast at a CAGR of 13.5% to CNY 74.4 trillion (≈USD 11.2 trillion) in 2016 from CNY 11.1 trillion (≈USD 1.3 trillion) in 2001, when China joined the World Trade Organisation (WTO). During a period of rapid reform, China strengthened its partnership with foreign countries and attracted significant foreign capital. Meanwhile, low labour and manufacturing costs have made China the factory of the world and a major exporter of goods. However, as the average annual wage of urban workers (i.e. labour costs) increased at a CAGR of 14.2% to CNY 62,029.0 (≈USD 9,959.9) in 2015 from CNY 1,332.0 (≈USD 385.8) in 1986, many foreign companies are reluctant to establish new manufacturing factories in China, and some have even relocated their factories to other countries, e.g. Vietnam. Therefore, China is focusing aggressively on research and development (R&D) for manufacturing and high-tech industries in order to compete on technology instead of on labour costs.